My Time in The Red Trenches: An Un-Romantic Romance 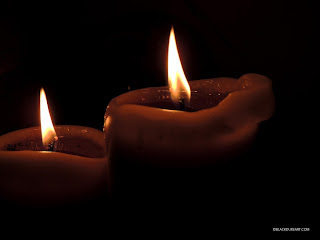 Many writers have had to do things they aren't proud of. Some of us edited college papers for stale pizza while working on the great American novel. Others took gigs as ghost writers, letting people put a different name on our hard work. A select few of us go a little bit further, into the bad part of Book Town. We take a deep breath, think of the money, and pen sweaty stories no one reads unless they're home alone. I was, and it shames me to admit I still am, a romance author.

A lot of people over the last few years have asked me why I'm so down on romance as a genre. They ask if I feel emasculated writing for a genre that people generally think of as feminine. They ask if I'm just doing it for the money and reputation until I can write something I want to write, and I'm tired of waiting. They ask if I blush when it's time to make my characters fuck. No, no, no, and for the last time, no. None of these things are why when I speak about romance I use the same tone I would use for being paid to clean up prophylactics from a drive-in parking lot. The reason is, simply put, that romance has a disease. That disease is bad writing.

Then consider the gauntlet thrown. I've been on the writing and editing side of this genre, and I've seen things that would make a 4Chan administrator puke. Plot holes you could fit a grown man's arm through, deus ex machina that didn't even have a sheet over them, and saccharine dialogue that gave me thousand dollar dental bills. I don't want to say these things, and it pains me to think of them, but they exist and people are paying hard-earned entertainment dollars for them. Somewhere. Or so I'm assured.

Romance publishers, particularly small publishers, are so ubiquitous they are some of the first (sometimes only) places writers with no publishing credits and no agent can go to for work. These houses are hungry for new talent, and it's not hard to get through the filters. With the death of so many literary magazines and e-zines I had the choice of working for free on the magazine circuit and hoping for crumbs, or shooting for publication and royalty checks with a story that had romantic elements to it. It was no contest, and I dove in head first hoping for the best.

I'd heard all the rumors and all the stereotypes associated with the genre. It's all just mindless porn, one group said. There's no plot, character development, or believable relationships another group railed. Everything's in pink, said a heckler somewhere in the back of my head. I steadfastly ignored these prejudices when I decided to pen romance stories. I told myself all genres have bad writers and crappy books in them. All genres have their own stereotypes. None of that matters now. Write the story, get the commission, keep quality control happy by writing solid, believable stories that people will like, and you'll have a publication list the length of your arm in no time.

On the one hand, I was right. I penned one short story after another, even put out a novella in the form of a short story trilogy, all of them with romance blends as the overarching genre. I created believable characters who had to work for the relationships they were involved in, and I threw them into the gnashing gears of plots ranging from capricious fae princes, to invading alien hordes, to steampunk science gone wrong. I was riding high... until I saw who I was riding alongside.

When I was asked to look at new submissions and edit stories that had been accepted I seemed to be the only person trying to change the stereotypes about the genre. Without breaking contracts and naming names, I read stories where villains monologued, where magically transported time travelers from ancient Persia spoke modern colloquial English and were unfazed by Western culture and trends without explanation, where more than half of a story was dedicated to the lead's routine tasks at a veterinary clinic, and where the entire plot of a story appeared to be a man's juvenile fascination with a young woman's body when he woke up as her instead of himself.

In these stories there was no courtship between the characters, and that was bad enough. Romance is a part of everyday life, and if one can write believable people then a believable relationship (a good one or a bad one) isn't far behind. There was also no attention to historical details, no attempt to write engaging dialogue or fight scenes when they occurred, no motivation assigned to characters beyond a stock role ("he did that because he's the bad guy" doesn't fly when I'm holding the red pen), and there was not a single action taken by a character that anyone who hadn't been lobotomized with a sharp stick would have taken.

What I Tried To Do About It

I did what any self-respecting creative professional would do. I suggested we reject every story which was poorly written (passive voice, shifting tenses, an un-engaging plot were the most common reasons cited). When I was informed I could not reject certain stories because they'd been accepted I uncapped my editorial tool and tried to make helpful suggestions. Most of my suggestions were outright refused (the very logical "why does the immortal villain care whether or not the couple is happy together? They pose no threat to him, and will die off in a few measly decades" was pretty much ignored, much to my disappointment), and the manuscripts went to press. I decided to keep writing character-driven fiction that, while it fit the theme of the collection or publisher, integrated all sex and romantic attachments into the plot in logical ways while still telling an engaging story with visceral text that got under my reader's skin.

I did the best I could. I felt then and I still feel now that I wrote interesting, solid stories any reader would be pleased with. Do you know what the most common compliment I've received from readers is? Those who've actually read some of my work? "I really liked it. It didn't feel like I was reading romance at all."

This is the literary equivalent of "I like fish as long as it doesn't taste like fish," and while it makes me proud, it also makes me a little sad. For a genre so expansive and with so much potential to have such negative regard tells me that we are doing something wrong. What is it? I don't know. My suggestions are that we collectively raise our reading expectations, refuse to spend good money on books that just try to titillate the audience for a quick buck, and for the love of all things holy use some classy cover art.

If you've read this far and aren't fuming too badly to concentrate, I am not saying that romance as a genre is bad. It's sick. There are healthy, virile authors in it trying to fight off the hackneyed infection. They can only do so much on their own though. It's up to readers, and if readers keep buying tripe then soon tripe is all that will be available.

I expect a book worth what I paid for it. I expect a book with attention to detail, whose characters make me care, and whose plot feels as real as the weave of my jeans. I expect real people to love each other, and to do so in such a way that doesn't make me reflexively draw a crimson Bic. I expect romance to stop being given an eye roll and a "boys will be boys" style excuse when it eats out of the garbage then tries to kiss you. That, in a nutshell, is what I expect.

For those who are curious what sort of romance an author with this much vitriol would pen, feel free to check out some of my stories, listed with links to free samples below. If you want to hear more of my ramblings and keep up with my doings, then please follow me on Facebook or mainline me on Tumblr.

Summer People: When Bethany takes a job to help save up money before school she just wanted a summer that would never end. If she's not careful, that's exactly what she'll get. YA paranormal romance (the monster reveal makes it all worthwhile).

Heart of the Myrmidon: After the Hyperion War the earth's surface became a wasteland, and those victors who remained were forced to live below. Mankind created weapons the like of which had never been seen before or since. Weapons like Pollux. One of the Myrmidon, titans engineered as elite soldiers, Pollux has been looking for purpose ever since the guns went silent. He finds it in the most unexpected of places. A sci-fi/romance crossover, this story has a bit of heat to it.

Skin Deep: The City of Angels is going to hell. Malachi has seen it all before, and he's prepared to wait it out. Miracles do happen though, and when someone tries to take his away things escalate quickly. Angels, daemons, devils, and an Old Testament enforcer, this modern fantasy story doesn't pull punches and isn't afraid to start out smoldering.

The Unusual Transformation of Abraham Carver: Iris Carver's husband is dying of a rare blood disease. When an experimental treatment cures him, it seems too good to be true. He starts vanishing out into the night, and when Iris looks into his eyes she sees another man looking back at her. How much of Abraham is left, and will she discover his secret before it's too late? An unapologetic dark steampunk/erotica trilogy, don't judge this book by its cover.
Posted by Neal Litherland at 11:46 PM

Buy Me A Coffee!

A Word From Our Sponsors

Another Word From Our Sponsors